Copper and copper alloys were manufactured in different ways, and thus, different professions could be distinguished in copper manufacturing. The coppersmith worked sheet metal. His main tools were a blacksmith's fire, anvil, scissors, saw and hammer. He made kettles, pans, cans, glass spouts, akers, etc.

A brass caster is someone who makes casting products from brass. He often worked with old objects of brass or with brass plates, which he had to melt. He also made his own brass by melting copper and zinc (galmeierts). By casting brass into shapes he made various objects such as chandeliers, lecterns, railings, candlesticks, irons, and taps.
An 18th century writer characterizes this profession as follows:

"This craft is by no means of the least importance, because there are many sciences and benefits involved, and it takes a lot to know how to fabricate the right moulds, how to temper the metal properly, and how to carry out the casting successfully. The brass casters mostly work with brass, which they use to manufacture many things for the benefit of mankind".

A brass caster was a typical craftsman. He had good knowledge of casting techniques and by polishing he knew how to bring out the golden shine of the brass. The models that determined the design of the chandelier he, or the client, had made by an artist.
Finally, there were also the gunsmiths and bellfounders, who cast bronze (an alloy of copper and tin). Just like brass casters they needed ovens and moulds.

In 1702, the invention of a Haarlem foundry contains, among other things: "in the casting house a draeybanck with a radt and a few drayisers, two fourneyssen a few models of copper, two pouring thangs, seven crucibles".

A brass caster could also cast bronze, and vice versa. There were gunsmiths and bellfounders who made brass objects.

Because of the differences in tools, supplies, and techniques. It seemed unlikely that foundrymen also worked as coppersmiths. Yet this does not correspond with the print of Jan Luyken on which he depicts the workshop of the brass caster. This print shows a bedpan and an aker, which are the products of a coppersmith.

Inventories of brass foundries confirmed the accuracy of the print. Such objects were also present in the brass caster's workshop and shop. But this did not necessarily meant that they made them themselves.

The Guilds
From the Middle Ages onwards, brass casters belonged to a guild just like other craftsmen. Generally speaking, brass casters did not have their own guild. This professional group was often part of the metalworkers, the street vendors, or the coppersmiths. In the guild rules, there was a formal separation between coppersmiths and brass casters. In everyday practice, this division was not respected as sharply as the various professional titles would suggest.

In a guild, knowledge and experience were exchanged. New guild members were trained in their trade. After thorough training, an apprentice could be recognised as a craftsman with the title 'journeyman' and eventually obtain the title 'master' after succeeding to the guild or master's test. Obtaining the title of master was necessary in order to work as an independent entrepreneur.

In Groningen, from 1654 onwards, brass casters had to make a twelve-arm chandelier for this masterly examination. The proof was described quite accurately in the guild letters. In Mechelen in the 15th century, for example, the master's test was described as:

"That no one will be able to become a Master Brass Caster, or he will also be obliged to do the following test and make a Brewer's lamp, cast in one piece, except for the screw as he will be shown". 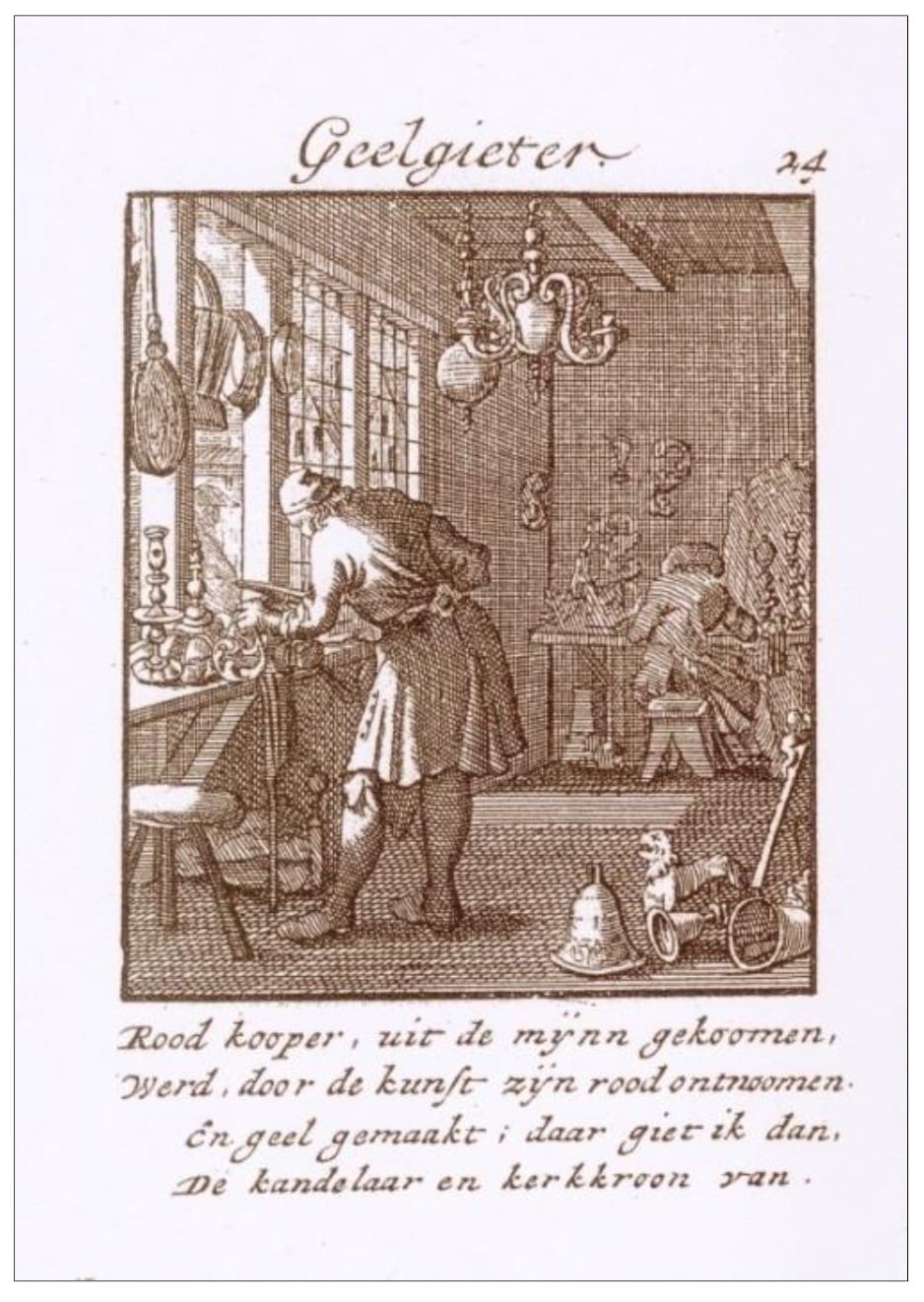