The remaining nine brass chandeliers from the old church near Brink & van Keulen were stored until mid-2020. In addition to restoring the four large brass chandeliers. The society has asked to enlarge the brass chandeliers with two layers to three layers. After a thorough search for the moulds and the redesign of the last arms, production could start mid-2020.

The new chandeliers have the exact same arms, bowls and candle holders as the brass chandeliers of type Canneman, only slightly larger so the whole is in proportion.

At the end of December and the beginning of January, the last nine chandeliers will return to where they belong. The shiny brass chandeliers will be hoisted up with new steel rods equipped with shiny acorns so the nave, side aisles and the high choir are again equipped with beautiful crowns that can be illuminated to any atmosphere with the dimmable LED lights. 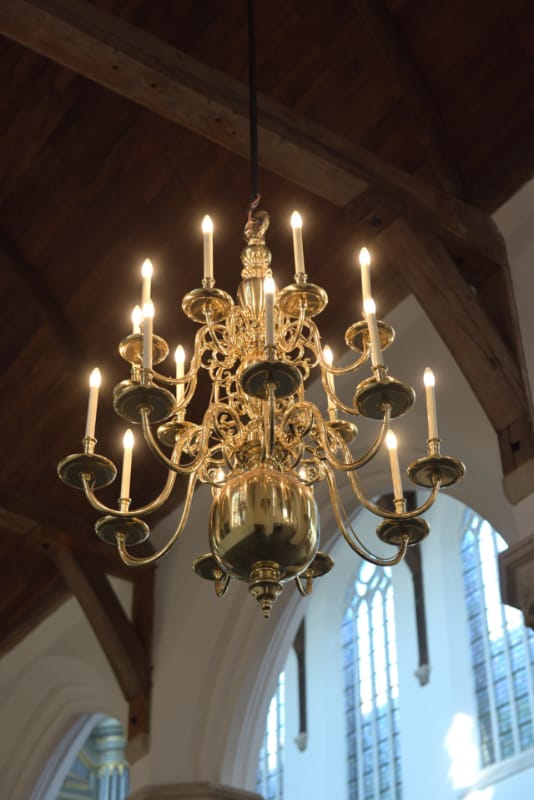 General history of the Old Church

The origin of the oldest church in Delft goes back to the dark beginning of the Middle Ages. Around 1050 the settlement along the ?Delf? probably already had a tuff church of about 12 by 30 meters.

Around 1240, civil servant Bartholomeus van der Made took the initiative to extend the church with two aisles and a choir. But when Count William II granted city rights to the bustling town of Delft in 1246, this was considered the official 'year of birth' of the Old Church.

Impressive
At that time the church was named after Saint Bartholomew, the patron saint of the founder. In the centuries that followed, the place of worship developed into an impressive Gothic basilica. But the Old Church still breathes something of the atmosphere of the Middle Ages.

Destroyed
On the night of 3 May 1536 there was a fire in the nearby Nieuwe Kerk, probably caused by lightning. It was extinguished with all hands on end, but more than half of the houses were destroyed. The Old Church was also in bad shape. That year saw the first major restoration.

Ordinary glass
Fate also struck in 1654. In the early morning of 12 October the 'Secret of Holland' exploded; the storage place for gunpowder. The blow - which reportedly could be heard on Texel - destroyed at least five hundred houses and the windows of the Old and New Church. Thanks to a collection in the surrounding villages and towns, reconstruction followed quickly. However, many stained glass windows were bricked up or replaced by ordinary glass.

Overall restoration
Towards the end of the eighteenth century the floor of the church weakened. This was followed by a major renovation to which all grave owners had to contribute. After a major fire in 1921, the church was closed for almost three years. From 1949 to 1961 and finally from 1997 to 2000 two general restorations of the stucco, the stained glass windows and the roof followed.

- Maarten Tromp
Tromp's last performance was in 1653, during the Battle of Ter Heijde. A sniper hit him in the left chest and he died. According to tradition his last words were: 'I have done, keep good courage'. However, eyewitnesses claim that he died instantly. Tromp was honoured with a richly executed burial monument in the Old Church. 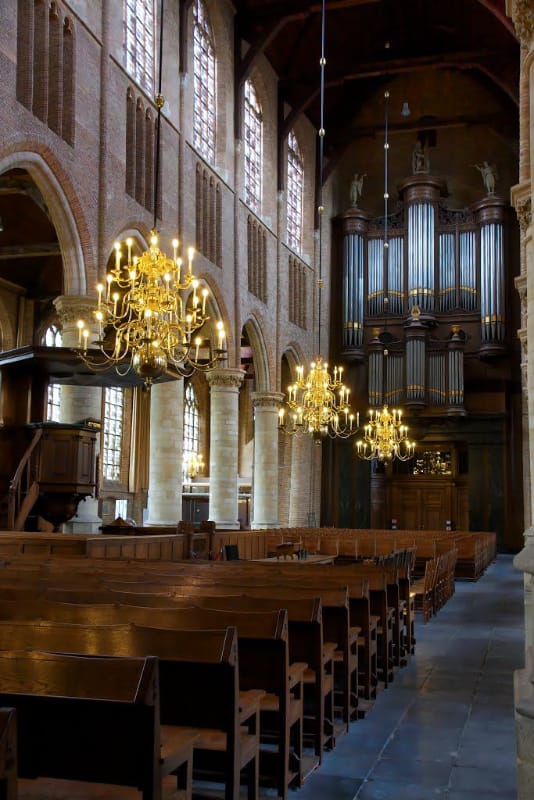 Introduction
In 2016/2017 a major restoration was initiated at the Oude & Nieuwe Kerk foundation in Delft. The crowns from the old church were carefully dismantled, packed and safely transported to Amsterdam by Brink & van Keulen 1646 B.V. in collaboration with the firm Den Hoed (link). A number of brass chandeliers were placed in storage.

In the current time it is important that chandeliers need little maintenance because of the height at which they hang. Therefore, all parts are individually coated with 2-component paint so the crowns require no maintenance for 15 to 20 years. By adding LED lamps with a longer life span and energy savings, the brass crowns can be hung at a great height for a long time.

Halfway through 2018 the team teamed up with Den Hoed and BQ Duiker to put the chandeliers back in place. Additional string lighting on the pillars makes it look like the crowns have been hanging there for centuries.

Subsidy
In 2006, the first plans were concretised and translated into a cost budget. Because of the size of the cost budget, the Nieuwe Kerk had been excluded from subsidy schemes twice in recent years. Until the announcement in September 2012 by then State Secretary Zijlstra that the Nieuwe Kerk in Delft, together with five other major restoration projects, were eligible for subsidy. A subsidy intended to make up the backlog in restoration and at the same time give a boost to the restoration sector in the Netherlands.

Two parts
The restoration programme was aimed at ensuring that the church could continue to perform its various functions in the future and, above all, that it could continue to expand. The existing ancillary spaces are now too small, the fixed benches in the nave of the church make it difficult to organise events and there are too few facilities. The restoration therefore consisted of two parts: carrying out repairs and redesigning, expanding and modernising the interior.

Next steps
The restoration and refurbishment of the Nieuwe Kerk will be completed in 2017. The Nieuwe Kerk was presented to the city during a festive opening week in November 2017. The realisation of the church basement was delayed during the restoration process due to various procedures. The church council finally decided, due to the increased building costs, not to proceed with the construction of the church basement. In the coming period alternatives for the necessary facilities will be considered.

Probably the Nieuwe Kerk was illuminated with chandeliers a long time ago. This certainly applied to the Old Church, until the lamps were sold to pay for the restoration after the fire of 1921... It is not clear how the authentic lamps disappeared from the New Church. The fact is that the current examples were donated in 1981 as a shining crowning glory to six hundred years existence of the Nieuwe Kerk in Delft. 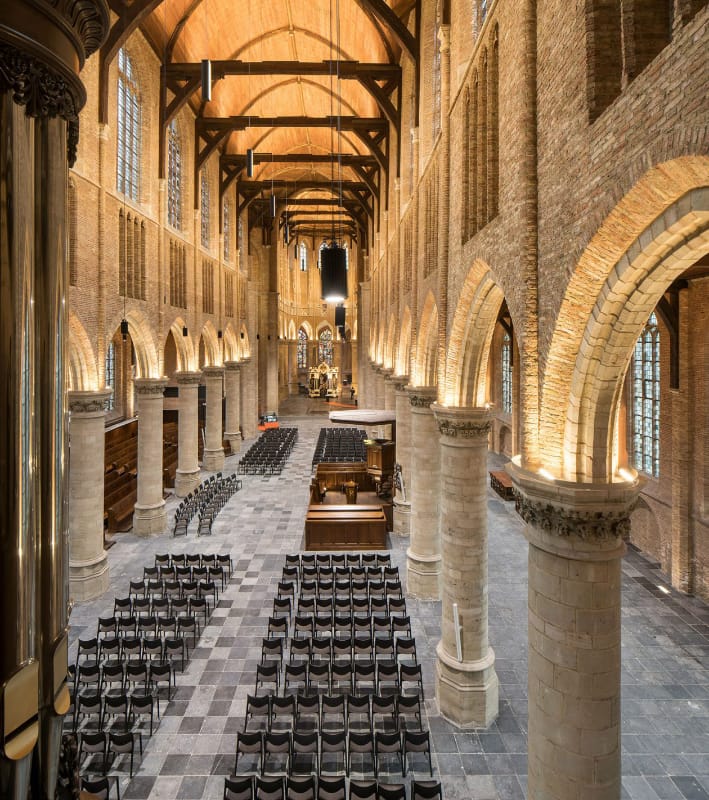 General history of the Nieuwe Kerk

The origin of the New Church goes back to a miraculous story from the year 1351. The eccentric beggar Symon sat in his usual spot on the Market Square, and got something to eat from a Jan Col. What happened then, no one expected?

Suddenly a bright light shone on Symon's face. The beggar said to his fellow townsman: 'O myn uytverkooren live befriends and siedt dy not open heaven? Together they looked up towards the field of gallows at the time... There, in a vision, they saw a golden church dedicated to Mary.

1380 first stone
As with so many churches, the construction of the New Church took place in phases. In 1393 the first stone was laid for a transept. After a devastating city fire, iconoclastic storms, the Delftse Donderslag (cross explosion) and various renovations, the Nieuwe Kerk was finished in 1655.

On 3 May 1536 an enormous fire destroyed half of Delft. The disaster was probably caused by lightning strikes in the Nieuwe Kerk. Part of the tower burned down. The organ, the bells and the stained glass windows were lost, and one of the roofs collapsed. A first renovation was required.

Delft Thunderclap
The second renovation of the Nieuwe Kerk followed the so-called Delft Donderslag. On 12 October 1654 some 90,000 pounds of gunpowder exploded in the Delft powder store. The walls of the church were stripped; roofs and windows were not spared either. Fortunately, thanks to a collection by the surrounding municipalities, the rebuilding of the city could begin quickly.

Plastering
In the 1930s, the Nieuwe Kerk underwent a number of changes for the last time. For example, the plaster was removed from the walls. This had a drastic effect on the appearance of the interior. Concrete bored piles were also placed under the church to prevent subsidence.

- William of Orange
Normally William of Orange would have been buried in Breda, were it not for the fact that this city was occupied by the Spaniards. Thus Van Oranje was buried in the Nieuwe Kerk in Delft. Since then, all members of the Dutch Royal Family have found their final resting place here.

- Queen Wilhelmina
Wilhelmina abdicated from the throne in 1948. Daughter Juliana became queen; she herself retreated to Palace Het Loo. Wilhelmina died when she was 82 years old, and at her own request was given a completely white funeral in the Nieuwe Kerk. Over the years various books have appeared about her. Wilhelmina herself wrote the autobiography 'Lonely but not alone' in 1959. 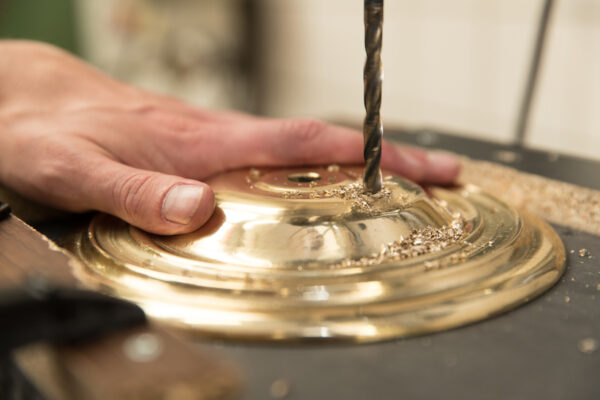 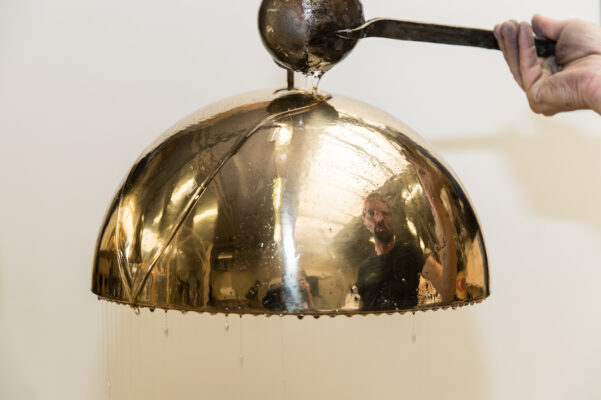 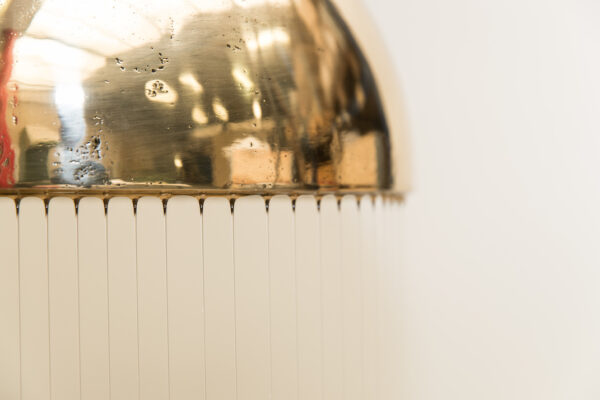 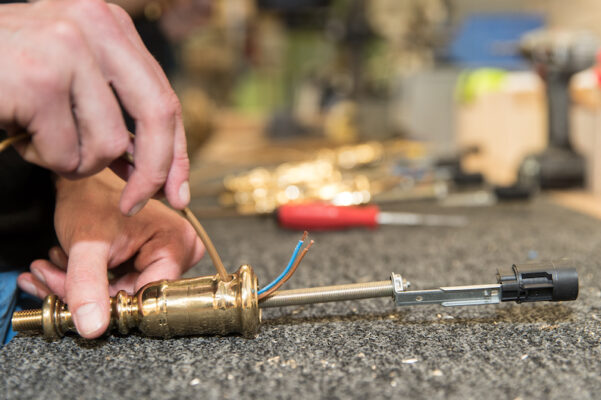 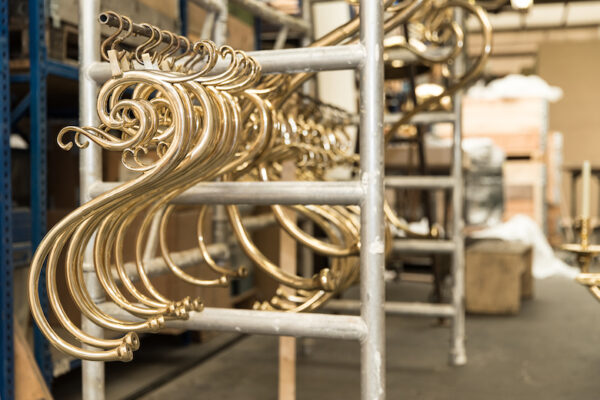 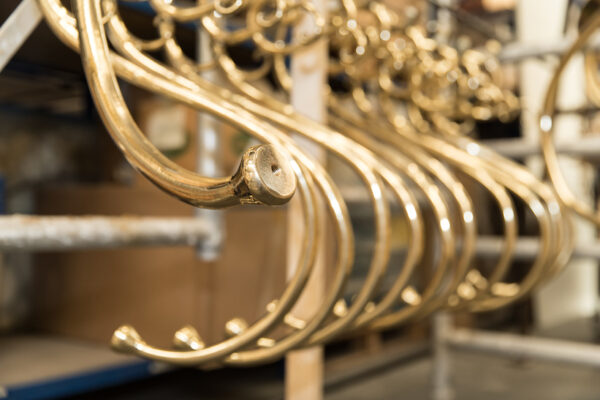